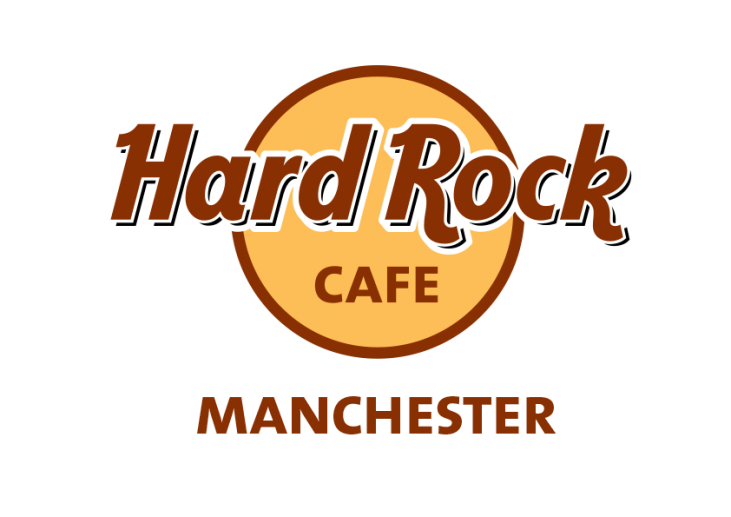 Finish each tour with a meal* in the Hard Rock Cafe

Situated in the heart of Manchester, The Hard Rock Café has become a staple name in music memorabilia history. There is always a fun, friendly atmosphere within the restaurant. Keeping the buzz of rock and roll and music history alive!

The first Hard Rock Café (HRC) opened on June 14, 1971, at Gloucester House, Piccadilly, London, under the ownership of young Americans Vincenzo Panetta and Chris Flagg. The Hard Rock used to have an eclectic decor yet now it has quite the opposite displaying music memorabilia in all their restaurants.
The chain began to expand worldwide in 1982 with locations in Toronto, Chicago, Paris, Berlin to name a few. Hard Rock locations in the United States vary from smaller, more tourist-driven markets to large metropolises (Houston, Philadelphia, New York City.) hence its fame. In 1990, The Rank Group, a London-based leisure company, acquired Mecca Leisure Group. They continued the expansion of the concept in its geographic territory. After the completion of these acquisitions, Rank gained worldwide control of the brand.

Hard Rock Café is known for its collection of rock-and-roll memorabilia. The cafes donations of music memorabilia but also purchase a number of items at auctions around the world, including autographed guitars, costumes from world tours and rare photographs; these are often to be found mounted on café walls. The collection began in 1979 with an un-signed Red Fender Lead II guitar from Eric Clapton, who was a regular at the first restaurant in London.

Hard Rock Cafe’s are situated all over the World from London to Cairo to Bangkok and Lisbon. With some having hotel and casino facility’s built in as well as a stadium in Florida it’s no wonder Hard Rock Café is such a well-known name.

Part of the Tour

The Hard Rock Café is a part of every Manchester Music Story Tour we provide. Each tour will finish at the Hard Rock Café in Manchester where it will be your choice to dine with them. There will be a wide selection of meals to choose from on their GOLD menu (when booked in advance)

2 courses from the GOLD menu

A choice of 5 great main courses, one dessert and a choice of one soft drink beverage.